It Ain’t Over Yet

After a few days of life returning to some semblance of normal here in Burkina Faso, the country once again is holding its breath as two factions of the army are set to square off against each other.

At the time of this writing, the National Army, loyal to the Transition Government, has surrounded the barracks of the Presidential Guard (RSP), known as Camp Naaba Koom, and has asked the people of Ouaga to avoid traveling in the area of Ouaga 2000, where the barracks is located.  A military operation is said to be underway.

During the past week, in the first cabinet meeting of the reinstated transitional government authorities, RSP was disbanded and ordered to disarm their weapons. RSP soldiers would be re-integrated into the National army. Bank accounts and assets of 14 people including failed coup leader Diendere and former Foreign Minister and top CDP official, General Djibril Bassole, were frozen.  Bassole’s home is also currently surrounded by the army and the Transition ordered his arrest.  It has just been confirmed that Bassole has been arrested.

However last Friday, the Head of the Army said Diendere brutally compromised the process of disarmament and stated they were at an impasse.  Yesterday, the army officials who were carrying out the duty of disarming RSP were taken hostage.  Diendere’s reaction to this was “ambiguous”.  It is not clear at this point whether he is in control of RSP any longer.  Diendere was reported as saying that the Transition government can’t dissolve RSP and that it would be better to resist.  In a bizarre twist, it was later reported via Burkina government communique that Diendere and Bassole were involved in asking for foreign support of the coup and calling on jihadists to derail the Transition process in Burkina Faso. These claims remain unconfirmed.

Today, one day after labor leaders decided to suspend the national strike which left the country at a standstill for 8 days, Ouagadougou has shut down once again. The airport is closed and the US Embassy is again warning citizens to shelter in place.  Civil society and Balai Citoyen have called for renewed protests and demonstrations. The peaceful mediation process, aided by the Mossi King Mogho Naaba who negotiated a deal between the army and the RSP late last week to avoid bloodshed during a tense stand-off, seems very much in jeopardy. 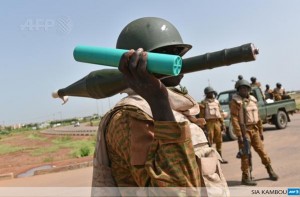 A soldier of the National Army carries an RPG near the barracks of RSP on Tuesday, September 29.  A potential battle between brothers looms over the nation.