“The Crazy Woman Isn’t So Crazy” 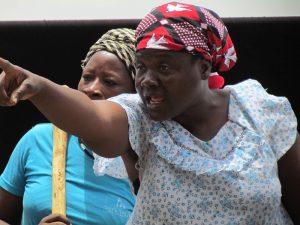 Synopsis: In this original play, a woman of the village is doing strange things on her farm- digging holes during the dry season, pruning trees instead of cutting and burning them, and not following the way things have been done in the village for centuries. People say she’s crazy. When she has a bigger yield at harest time than anyone else in the village, she is accused of using “black magic” to steal from everyone else’s harvest to augment her own.  The village chief consults his sand diviner who explains that this woman is not crazy at all but adapting to a changing climate with innovations that will help farmers become more resilient. The chief summons the woman who has been using the agroecological innovations and asks her to train the entire village in these new techniques.  The village comes together with a new understanding, and the chief is the first person to begin utilizing these new techniques on his own farm. The play performed in 6 villages in the Eastern Region of Bilanga and reached over 2000 people.

Why This Project is So Important 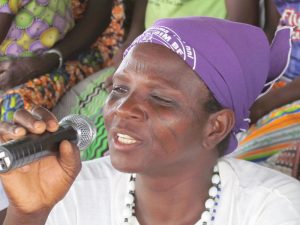 Burkina Faso is an arid, Sahelian country which suffers from drought, desertification, deforestation, flooding, and land degradation due to years of monoculture farming and the practice of “slash and burn”. The Sahel is being more affected by global warming than any other region on the planet. 80% of Burkina’s population are subsistance farmers- they grow their own food to survive. Unfortunately, it is becoming more and more difficult to grow enough food for their families due to a changing climate in which temperatures are getting hotter and rainfall is more erratic. The simple, cost-effective and powerful techniques which ANSD is teaching smallholder farmers and which BARKA’s original play promotes are designed to build resilience in one of the most vulnerable populations in the world. They are life-changing and life-saving.

After the performances, debates and group discussion were lively and engaged. Audience members didn’t want to leave even after the event ended! By evidence of the robust dialogue, and commitments by farmers to immediately begin using the new techniques described, it was clear that this play had an important impact- one that will continue to be monitored and evaluated by ANSD.

“For sustainability, techniques alone are not sufficient. There must also be a collectivity of social mobilization. People must organize together to take responsibility for planning and land improvement and food sovereignty.”

The performance was seen by 2,025 direct beneficiaries.

People in village and public performances